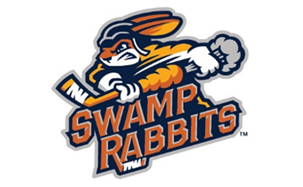 Road Warriors to build stronger ties with the Greenville community

Greenville, S.C. | August 26, 2015 – The Greenville Road Warriors are excited to announce that they will now be known as the Greenville Swamp Rabbits.

The Road Warriors came to Greenville in 2010 and were purchased by current owner, Fred Festa, chairman & CEO of W.R. Grace and Co., in 2012. Since their arrival, the team has been embraced by the Greenville community, making the rebranding a logical transition for the team. After signing a new five year lease with the Bon Secours Wellness Arena in March 2015, the timing was ideal to strengthen the team’s ties to Greenville and the surrounding communities.  The Swamp Rabbits represent a piece of Greenville history that not only pays homage to the legacy of the historic train line, but also provides a brand that better appeals to fans of all ages.

First known as the Carolina, Knoxville and Western line, and later becoming the Greenville and Northern railroad, the intent of the railroad was to connect Greenville with the rich coal fields of Tennessee, providing the Carolinas with a direct line over the mountains and access to cheaper coal. The railroad received its nickname, the “Swamp Rabbit” by locals who would use the freight train as a means of transportation to picnic in northern Greenville County. Completion of the rail line proved to be more of a financial commitment than expected, leaving the project at a halt near the foot of the Blue Ridge Mountains. Today you can find this railroad marker located beside the “Swamp Rabbit” Pedestrian Bridge, which crosses over the Reedy River just off of South Main Street.

“After much thought and consideration, we determined that we wanted our new identity to honor a piece of Greenville’s history while also being relevant within the community today” said Fred Festa, owner of the Swamp Rabbits. “Several factors were taken into account when deciding on what that representation would be. Ultimately, we selected the Swamp Rabbits because the name holds dear to a variety of residents, businesses, popular recreational areas and the historic landmark, the Swamp Rabbit railroad, dating back the 1920s in Greenville.”

“To be able to embody a part of Greenville’s past and present via the team’s identity is an incredible feeling,” said Chris Lewis, general manager of the Greenville Swamp Rabbits. “We think the Swamp Rabbits will symbolize the competitive spirit of our players and the vibrancy of the community on the ice and off. We want our brand to best reflect what a night out at a hockey game is all about, which is fun and excitement for the entire community.”

On Friday, October 23rd at 7:00pm, the Swamp Rabbits will face off against the South Carolina Stingrays in the season’s first home game. Season ticket packages are on sale for the 2015-16 season and are available for purchase on the team’s website, http://www.swamprabbits.com/

ABOUT THE GREENVILLE SWAMP RABBITS

The Swamp Rabbits are members of the ECHL, the nation’s premier “AA” hockey league, and are affiliated with the NHL’s New York Rangers and the AHL’s Hartford Wolf Pack. All home games are played at the Bon Secours Wellness Arena located at 650 N. Academy Street in downtown Greenville. For more information on the team, or to purchase tickets, visit http://www.swamprabbits.com/.